I’m sorry I did not get to it sooner, but if you were here you’d know that after one week of Art Basel Miami and all its trimmings from parties for Isabella Rosselini, Bruce Weber, Julian Schnabel, Sean Penn to art events in at least 320 different locations on the beach and midtown causing traffic that puts the Paris peripherique at 7am to shame, if you’d lived through all that you wouldn’t want revisit it, well, till the frenzy has not only worn off, but a sense of objective relativity has settled back in.

In the middle of it all Kiki got sick. On Thursday night, after a party I co-hosted for Water.org, and meeting Alastair at the Schnabel/Maybach/Sean Penn/Haiti (yes all in one breath) event, where I posed as gallery owner Angela Westwater, the one who had nabbed husband away from me for the #1/a-list/VIP studded event that evening (of my very civilized dinner for water.org to which husband did not come because Ms. Westwater’s offer was superior ). Are you getting the escalation of frenzy and stress? (I must remember, I tell myself, that when I’m 70+ and would like a handsome, younger, entertaining male on my arm to a #1/a-list/VIP studded event, I can invite any married man out there. No problem. And I will. I promise I will. Fuck it, I’ve spent a lifetime being perceived as a threat, when I am 70 and no longer perceived as a threat, I will take advantage and tempt younger men with my #1/a-list/VIP studded events).

speaking to 40 dinner guests @ water.org dinner about Arts for a Better World and my beach plastic

But I’m way off topic. That night, when I posed as Angela Westwater, because it turns out she’s way too A-list to pick up her name tag, and I turned up under her name it was assumed I was her and ended up with her tag, and passed  Sean Penn in the corridor who threw me a look like he’d just blown up the headmaster’s car, but apparently I’d just missed his angry rant about Haiti and the lack of help which resulted in the sale of  four Schnabel drawings raising over one million in a few minutes. Well, that night Kiki got sick. I had a few, not my fault, I was served quite a few, wines, scotches, champagnes. I was tired, bone tired. So I was sleeping like I really needed it.

Leila walked it at 3-ish, and said: “Kiki just threw up all over the floor.”

For the first time in 14 years I said:

“I can’t deal with that right now.”

I turned over and went back to sleep.

Guess what? Husband got up! Maybe it was my total coolness about his date with Angela, but he got up and cleaned up the puke, and I experienced a very steep learning curve. Which is: I can say things like “I can’t deal with that right now,” and he’s there. Ready to jump in.

That was huge and has NOTHING to do with Art Basel Miami.

My promise of blogging about my installation as it evolved, which named itself the Bottle Shack after it was built because it was not quite as slick as I had imagined but took, like all good art, a life of its own determined by material, circumstance, timing and mood,  and ended up quite random and gorgeous and shacky and textured in a messy luminous kinda way, that promise was way more than I could live up to.

So this is it how it went:

It started with 2400 recycled bottles. 1000 from my local school bottle drive. 500 from Recyclable Planet a reverse vending machine where you drop off your soda/water bottles, and 1700 from South Eastern Recycling. Not all were usable. Some were really disgusting with like gum stuck on the outside, food stuffed inside, mold, grease, like you dont wanna know what people do to/with their water bottles.

We, the kids, their friends and I started by removing all the labels. In order of popularity: Dasani (tap water, hello!), Zephyrhills (from a natural spring near Tampa Florida, yum!), Publix spring water (paradox), Coca Cola, Sprite, Perrier, and so on.

While we peeled labels a wooden cube structure was built by the show’s carpenters. We strung bottles on wire with Lara, Gabriella, husband  and Jennifer and hung them on this wooden cube which collapsed right away. Shit! Now I was behind schedule.

A new steel tube structure with sloppy horizontals was built next. I had to let go of my Dutch sense of perfect parallels and become more,  lets say, island…? 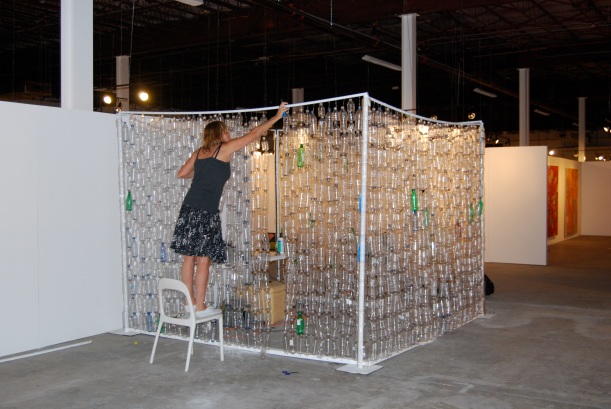 By Sunday noon my “installation” was nowhere near installed.

It soon became a case of, if I’d know what it takes I’d never have done it. Those are the projects I like best because I go into some strange obsessive state of mind. I drilled holes in 2400 bottles. I strung them on wire and tied them. I had some help from Steven, a DASH fashion student, but was mostly alone at the cavernous hall till midnight. I crept through some time-worm-hole and by Tuesday morning I moved into my pop-up studio bottle shack and got ready for the opening party.

Which was that night and I posed in my perfect dress, in front of the shack with an American Indian Chief who had blessed the event…oh for  global and good-cause culture clashing! 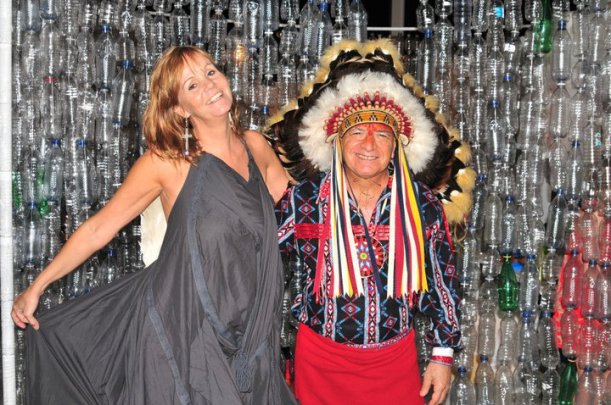 Tuesday night held many other opening parties. There was Design Miami, there was the Mark Newson Riva boat at the Standard, there was Nadja Swarowski’s dinner party at Soho House, there was Bruce Weber at MoCA and a dinner to follow. Huband went to most of them and took Iona (14) as his “date”. It was like Iona’s coming out night at Art Basel Miami 2010. She was chatted up by a married man who asked her if her guy was in the film business. “You mean my Dad?” she answered. He then told her he ‘d come to the dinner with his buddy, acting like he was single but the next day she saw him swinging his wife and baby  in the hammock chairs outside Design Miami. Another steep learning curve in the Gordon household – men will say anything to get your attention….

But I wasn’t there. I was at my own opening with my team.

My first ever art opening in fact. I’ve done countless fashion shows and their after parties, I’ve given many of husband’s book launch parties but I’ve never had my own Art Opening! 100 sq. feet of me. Of what I wanted to express at that moment in time. In my time. In Miami’s time. In the world’s time.  An opportunity to make a statement. 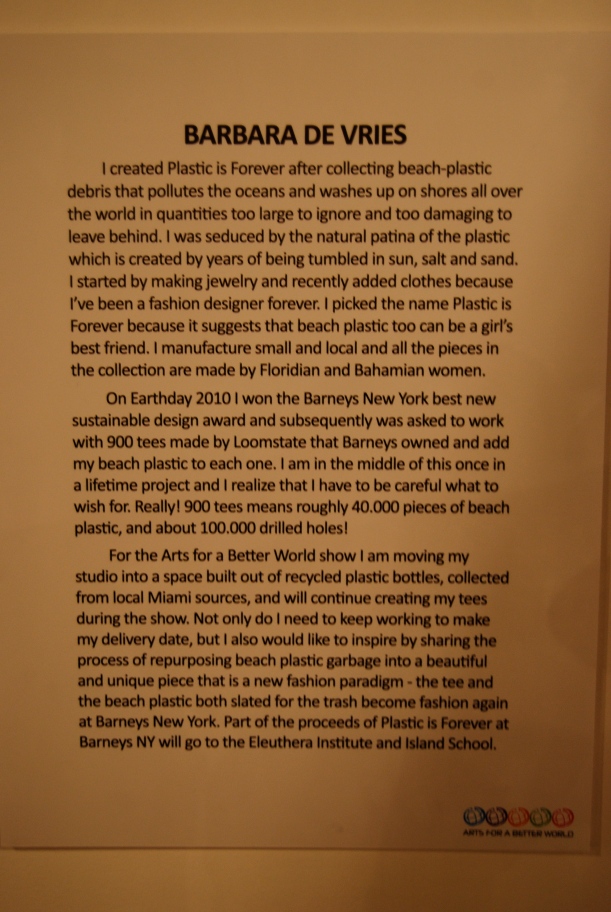 I took on plastic pollution. 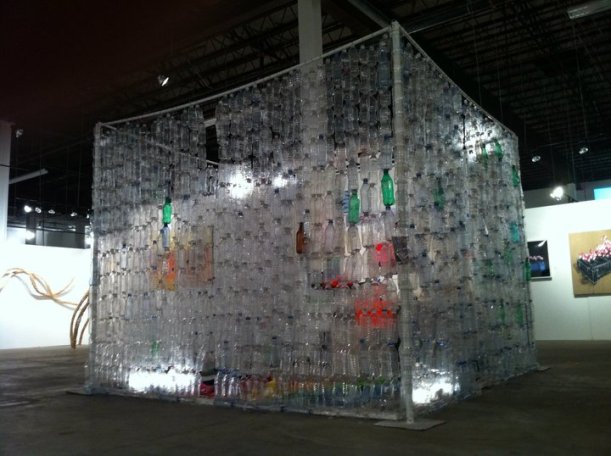 I worked in my pop-up studio and showed how to turn catastrophe into beauty hoping to inspire. Hoping to educate.

My favorite was when  kids poked their heads through the bottles and asked me all sorts of questions which usually started with, “what are you doing in there?”

I loved it when Michele Oka Doner breezed in  like a luminous fairy, with a posse of Micky Wolfson’s glamorous women friends. They all came inside the shack, and then called out to Micky to join us. Luckily he declined. The shack was not built to hold visitors, it was built to be peeked into…

I joined Alastair and Iona at the Swarowski dinner. I flirted with Michael Tilson Thomas in the elevator, having no idea who he was other than rather cute. I saw my long time Dutch friend Li Edelkoort, we kissed and hugged like long lost loves knowing that the next time could be years from now. I embarrassed my dinner partner by making rather harmless comments about the other guests but when we parted he said I was his favorite new friend and he was the first to visit the Bottle Shack the next morning. A rather nasty writer called Derek to my right told me gleefully that Julie Gilhart had just been given the boot by Barneys.

Julie! My champion! The one who had introduced my beach plastic tees to the Barneys buyers! I e-mailed her when I got home and three days later she came to my Bottle Shack. My new favorite friend. The wonderful awesome Julie Gilhart! Not rattled at all by recent events, but inspired by its possibilities….

Loomstate‘s Berrin and Vivienne came down to Miami too.

To see me  and their tees inside the shack. They took millions of pix and did an interview movie and we had a long noisy lunch at Joeys. They placed a great story about the Bottle Shack in Ecouterre and posted a glowing report on their blog. Thank you Loomstate!

Sunday 5 pm it was over!

I had loved it. It felt like I was whole again. After several years of not knowing how to redefine myself in a way that was fulfilling and meant something in a modern global context, realizing I had grown out of being a traditional fashion designer and did not know exactly how to fill the void. My creative void that was like a gaping hole, which made me unhappy. Unsettled.