Aqua has no water.

About ten minutes ago the pipes gurgled and the battle cry “FLUSH – NOW” echoed between the Aqua luxury condos. As a result of over-enthusiastic flushing the water is off again, unable to instantly flood, what? 2000, 3000? 4000? toilets.
How many toilets between 51st and 63rd Street one wonders, how many dishwashers? How many sinks, showers and washing machines?

We just showered at our friend’s house. She’s away skiing. We fought over who’d get in first. I lost. I got last but longest. While waiting I remembered going camping, I did this a lot when I was a teen, and being everso grateful to be home as if the only satisfaction of being one with nature for days on end was the ensuing luxury of standing under warm running water until the hot ran out.

Yesterday, while I was having a swim ( yes there was still clean water in the Aqua pool), a women hunched by my side, and, while avoiding eye contact , filled two gallon-flasks. Stealing water from the pool! Really, how third world is that? That’s one tea party I do not want to be invited to (actually I can name a few others).

“Soon,” they tell us. “We’re working on it,” they say. “Divers have been in the water since four this morning,” they assure me. Divers? How? Really? Where there are divers there is water!  Aqua super heros!

Mommy, I hear a diver in the pipe! Aaaahh, good sweetie, things will soon back to normal…

Turns out our water pipes run under water, like along Indian Creek. Thats why, this morning on my way to get bottled water at Publix, I saw that confused crew of guys in fluorescent gear and flippers poring over a map, while leaning against a small shabby boat on a City of Miami Beach trailer.

” In the interim, we are working on providing portable toilet services for the community.”

Meanwhile one learns from these “trying” situations. First off: I learned that Iona has a nervous breakdown when she’s unable to shower for 24 hours, and will refuse to leave the house. I also learned that the twins couldn’t care less. I learned that my hair is best hidden after 36 hours, but that husband, when I wear head scarf, will let me know that he doesn’t dig my “chemo” look.

Fuck off! I said and also learned  that my sense of humor, like the water, has run dry.

better times, the days of plenty…. 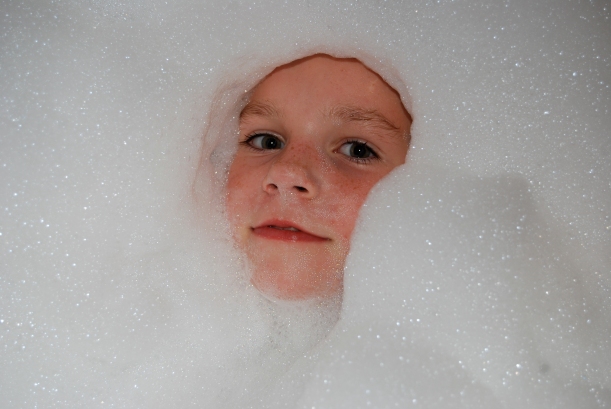 Its a crazy mess inside my head.

Every For Sale sign becomes a For Rent sign, everywhere I drive I imagine living. I ponder the beach versus the mainland, Sobe versus Brickell, the Grove, Downtown, North Beach, Normandy Isle. I weigh ocean-front condo against a home with a yard against a community townhouse. Then I’m sure again that Aqua, where we now live is perfect, and that I should  find a  more affordable place here. I’m turning into a real estate catalog. Every Miami for rent three-plus bedroom now has a place in my mind. 95% is unaffordable and other the 5%  is too small for our five enormous personalities. If its true that you become what’s on your mind then I’ll be a condo soon ( a gorgeous large but cheap one).

Yes, yes, yes Iona got into DASH and our nine month escape from the winter has turned into something very different. Oh its life-changing,  our friends say. Hell yes.  Like how the fuck do I patch this one together. Didn’t we just built a huge beautiful house that I love  back in Milford? Wasn’t it the perfect place for us? Didn’t we create a balance between living, kids and work, lots of lovely friends, in a picture perfect village? Didn’t I say, when we moved in three years ago, it was great to know that we’d never have to move again?

But no, we had to go and fall in love.

Suddenly Miami is the perfect place for us. We ALL fell in love with the palm trees, the beach, the bays and canals and swimming pools, the gardens and parks on every corner. Miami is crazy  cosmopolitan, its not a white American city.  Its Cuban and Italian and Jewish and Venezuelan and Chilean and its loud and a tad dangerous and  hot and sweaty and gritty and romantic and we want  it. We don’t want to flirt with it anymore, we want to get married and have babies. Well, maybe no more babies. But we want to look after our three baby girls, do whats best for them. And Iona is in love with DASH and Kiki and Leila are like Miami, wild and intense and engaging and a tad dangerous.

Husband and I? Don’t know. I’ve always been a sucker for moving. I left home in Amsterdam when I was seventeen. But my bag had been packed since I was ten. Not because I hated my life. I’ve never moved because I hate my life. Paris, Sydney, Melbourne, London, New York, Princeton, Milford, Miami,  I always moved because those places nurtered me enough to turn another corner and experience more, learn more, challenge myself more and expand. Its never personal. Its just who I am.

And husband? We’ll let him speak for himself. He loves to swim and his goal is to swim in every pool in Miami and write about it. I’ll say no more I’ll just send you links, after all he’s the seasoned writer in this house.

And I’m going a little crazy…

my turtleneck WILL come off...

Barbara de Vries was born in Amsterdam, where she was a shy child until her fourth grade teacher encouraged her to dance on her desk and tease the boys with her zip-down sixties dress. After this pivotal moment of self discovery her life improved and she started to dream of horizons beyond the grey, wet and flat security of the Netherlands. At age seventeen Barbara packed her bags to pursue a modeling career in Paris, but when she refused to strip for designer Andre Courreges (go figure) her agency threw her out. Eventually she became a top model in London for publications and designers like Vogue, Bazaar, Zandra Rhodes, Yves Saint Laurent and many others. She used modeling as a way to support herself through fashion college and launched her own collection which sold at Harvey Nichols, Neiman Marcus and Seibu, Japan and she dressed celebrity clients like Princess Diana. After ten years Barbara packed her bags again and came to New York where, in 1990, she was snapped up by Calvin Klein to become his senior VP of Design and she went on to create the CK collections which made fashion history when Marky Mark and Kate Moss wore (very little of) what Barbara had designed while posing almost naked over Times Square.
Next Barbara stripped for author Alastair Gordon, who soon became her husband. They had three daughters and moved to Pennsylvania, which dampened Barbara’s exhibitionist spirit until she discovered that, now that she’d passed forty, writing was not only the next best way to bare herself, but that from her new perspective she could throw light on the unattainable standards of beauty the fashion industry puts upon women’s self esteem. While she continues to work as a freelance creative director Barbara also writes professionally, such as the piece for NPR’s All Things Considered  on modeling and eating disorders.

Here it is. The first try-out synopsis I’m putting out there:

The Blackberry Diet is nothing like the Acai-Berry Diet.  The BlackBerry Diet is about sex and beauty and fashion and Paris and Calvin Klein and Kate Moss and family and aging gracefully. The BlackBerry Diet actually works. At least it did for Katja van Doorn. A harassed mother of three, who, several lifetimes ago, was an aspiring model in Paris, and now suspects that her husband Finn is having an affair, a BlackBerry affair, with a pretty Parisienne, who apparently looks like a younger version of Katja. While she’s spying through her husband’s BlackBerry, Katja stresses about her picture-perfect life in the Catskills, relives her early days in Paris, pines for her glory years in the New York fashion world and loses weight. As her marriage unravels she realizes that fifty is not the new thirty and she finally takes matters into her own hands and heads back to Paris, where past and present collide when she prepares to confront her young nemesis…

Would you read it?