Israel was handsome, young, beachy (see above far left), worked in the fashion/model biz, a boarder, an artist and an entrepreneur who was launching a line of skate boards. He was only 18 years old when he was tased and killed by Miami Beach police. He still wore braces.

Miami has been working hard on re-branding its image over the past few years.

It introduced Art Basel Miami and Design Miami to give the city a hipper, cooler, younger image and get away from its drug violence, retiree, Cage aux Folles party image of the nineties. Starchitects have been brought in to build international press-worthy public buildings like the New World Symphony by Frank Gehry, 1111 Lincoln and the PAMM ( Art Museum Miami) by Herzog deMeuron, and  several more headline grabbing buildings  by Zaha Hadid, Rem Koolhaas and Richard Meyers are in various stages of construction.

Part of this revamp has been the creation of two different creative districts; the Design District and Wynwood. During Art Basel Miami these are the two “new” areas of Miami where millions are spent on international publicity. Wynwood is the  area that is brought to the international travel market for its “world class galleries that represent young local artists.”  To illustrate this the city and property owners, inspired by the success of Keith Haring in eighties Soho, “give” abandoned and other buildings over to graffiti artists to use as large and free canvasses to express themselves fully and freely. These buildings look like abandoned warehouses somewhere near Detroit airport before, and a lot more interesting after they have been made over with multicolored spray cans in the hands of aspiring Banksys.

Wynwood as a celebration of local graffiti talent is a must see destination  headlines scream all over the world in their travel copy on Miami.

Even in the luxury branded Design District the main investor and developer of the area, Louis Vuitton, brought in graffiti artist Retna to express his art on their facade, which opened with all the champagne and red carpet A-listers that are expected from Miami and this French luxury brand.

Shepard Fairey, he of Obama poster fame, did many walls at Wynwood’s Central block – The Wynwood Walls. When a Banksy mural  was stolen from a London neighborhood it predictably showed up, all thousands of pounds of concrete, at a Miami art auction house.

Are you getting my drift?

Miami is touting its graffitied walls  like they are the fucking Eiffel Tower of the American south!

Where does that leave young, ambitious Miami artists?

Guess what platform, canvas, form of expression, medium, they use….

Guess who encourages them to do so by GIVING them walls, by rewarding them with money and fame, by honoring art school students with Awards of Excellence and Most Promising?

The City of Miami and its developer buddies!

And guess who did not get the memo….

Their own pumped-up police department!

Israel Hernandez tagged an abandoned Mc Donalds on the corner of 71st and Collins. I know it well. Its next to my local ATM machine. It has been graffitied and tagged and vandalized over the past year. He left a small R for his street name Reefa.

The Miami Beach Police caught up with him and tased him. He died soon after. 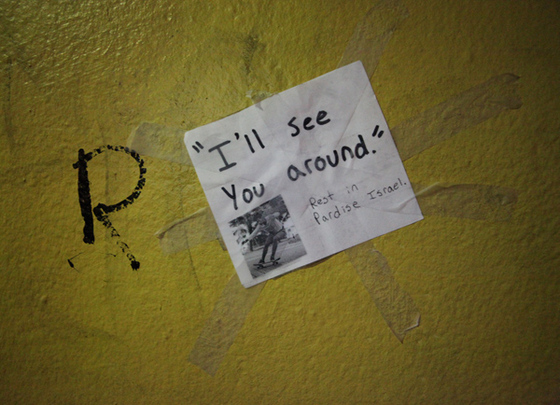 Our culture needs kids like Israel Hernandez. We need them to remind us what it is to be young. To make a difference. To be noticed. Did we not all at some point stand up to authority and held the mirror in its face?

Come on Miami, look in this mirror now, and take responsibility for the life of this young and promising young man. Miami YOU set the bar. You held up the carrot. You cast the die by glorifying graffiti and its artists. So why keep quiet now, when your own police tases and kills your messenger? The messenger you recruited and sent out there… the messenger you need to send your new cool brand identity out into the world.

Come on Craig Robins,  Matti Herrera Bower, Robert Wennet, Goldman Properties, Carlos Gimenez, Jorge Perez, etc. Do the right thing. Speak up, speak out. Get the memo of your plans for Miami’s global marketing out to everyone, including the MBPD. Start an art endowment in Israel’s name…

Do what it takes to recognize Israel as a child of your own….

Link to video with interviews with two eyewitnesses 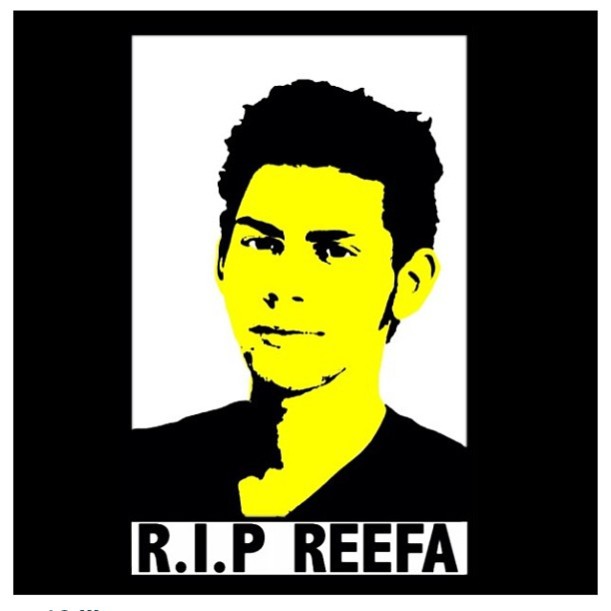 art for Slap by Jane Simmons

Footage of protest/rally on Saturday August 10th from 1-5 at 71st & Collins.

You get the math?

But where is this irony reflected? Is a Picasso still a radical challenge to the status quo? Where is the new rage?

This commodification of status art is boring. The endless (and I mean endless) rows of mind-dulling booths with static canvasses, photos, installations, sculptures and hangings is so overwhelming that it’s impossible to recognize the good from the bad from the new from the old.

Picassos, three in one booth, look blah, Calder, Delaunay, Miro, feel like so what? An entire gallery filled with about 200 original Warhols, cute but can we go home now…

To present art, some great art, as interior decorating like an all-you-can-eat art buffet to binging collectors in  the same space that held the car show just a few weeks ago and the boat show next month diminishes its cultural and historical value. Just because the creamiest 1% of the 1% cream have agreed to agree, leaving nothing to chance. Their millions safe within the vaults of  big brand investment art. 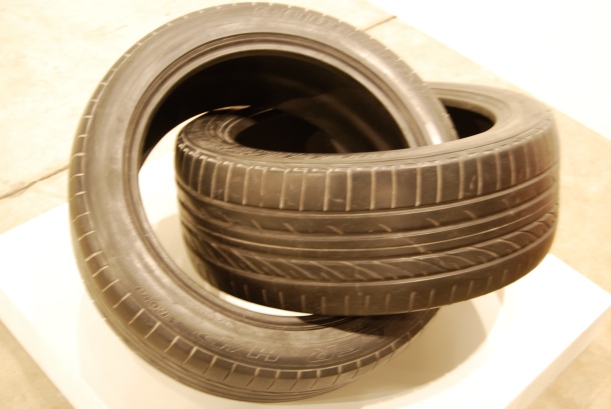 intertwined tires made from black marble

Design Miami was nestled like a co-dependent snooty mistress in a tent alongside the massive convention center.

Design Miami used to be in the Design District, where this year the Buckminster Fuller Dome and Dymaxion car where re-created by Sir Norman Foster making an inspired statement for inventive design that reflects past and future. Art Basel Inc. has taken over Design Miami and keeps it close to their all-encompassing police-state-of-the-art campus, with Schwarzenegger-esque guards who look like they will pepper-spray anyone that does not meet the  humorless Swiss code of conduct.

Design Miami houses designers. Or rather galleries who sell the work of furniture, jewelry, lighting, life-style designers. No art allowed in this building. Just design. One booth had two blank walls with nails where their fifties wall weavings would have hung had it not been for the style police deeming them to be art and  forbidding the gallery to sell them.

So, you may wonder, what happened to art that says fuck you to all this monitoring, keeping track and bourgeois judging of what should live and what should not?

Where is the To Create Art is To Burn Alive spirit behind this snob spectacle?

Where is the devil-may-care, I have the urge to get lost, give me a piece of wood, a canvas, a block of clay and I’ll see you next year, spirit of the artist?

Even the satellite shows with younger and edgier work were eager to register on the luxury radar, and attract those god-like collectors who  spread the magic gold that makes or breaks careers. 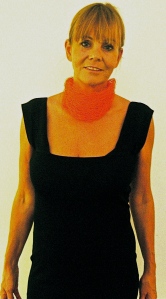 This 1% was getting dirty in Wynwood where another set of walls had been given up to artists who painted manically, obsessively grinding and wielding their cans, sprays and ladders. 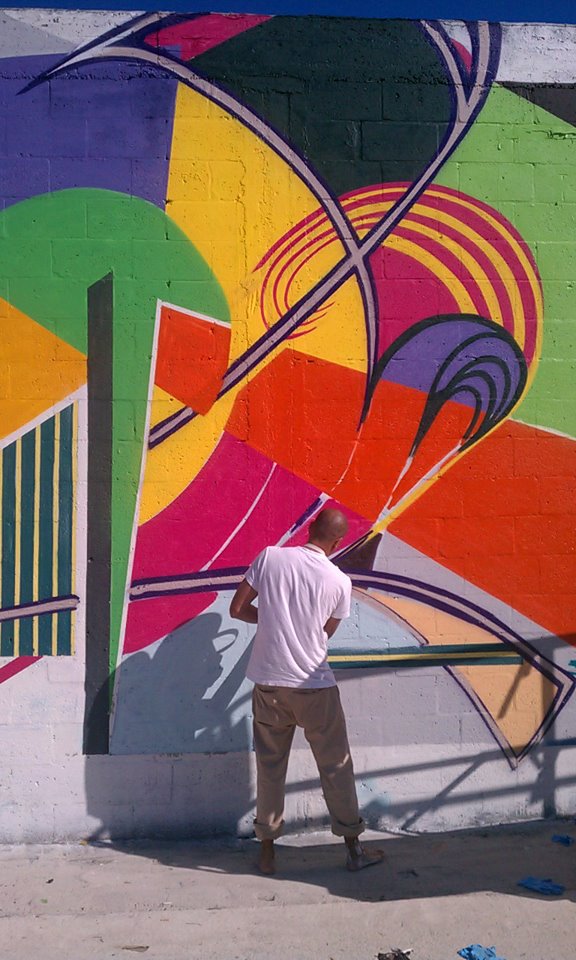 Above  a collaboration:  john wendelbo / Mare139,

And the art was there on the walls, being created in the moment for everyone to see – a democracy of participation.

Art that hopefully foreshadows an awakening to a time where status is lost, luxury deemed boring and boundless creativity – like anything – is possible…again. 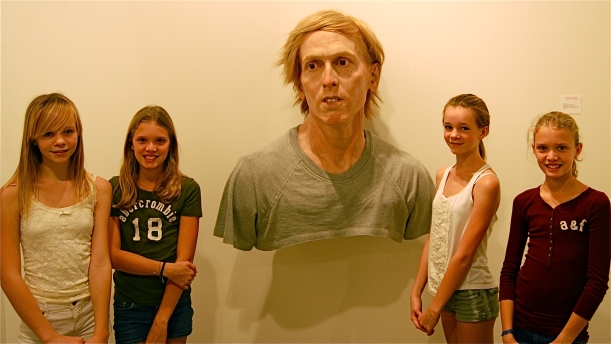