At our candy-land bachelor pad in Miami Beach we have TV. I did not have  TV for years.  So I wanna know; WTF is up with all those shows that pitch women against each other, like portray us all as super bitches, dumb and out to get each other?  Like we’re always, always ready for the kill…

I have been shaped by women. My womentors. First my mother. I am who I am because of my mother. And then several of her coolest friends. I always have women crushes on women who inspire me, women who are so cool that their influence somehow changes me, makes me bigger and better and more fearless…

I don’t see women as my competition and I’m always taken aback when I’m seen as a nemesis. In the past nine months I’ve made great new women friends. All awesome in their own way, like Esther, Jody, Francesca, Sheila, Ineke, Iran, Sam, Suzy, Zaha, Petra, Lily, Victoria, Nancy, Astrid, Heather – all fabulous women.

My editor friend (and #1 writing mentor) Amy Ferris recently asked me to write a piece about an important woman-mentor in my life. The first person who came to mind was, of course, my mother. Gail came into my mind next. Gail is my NYC mentor. So this is what I wrote: 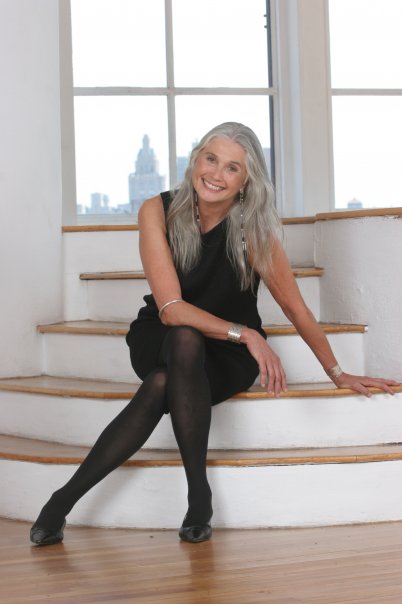 Gail Bruce at her Ramscale Loft

“When I was in my thirties I did not see myself as a mentor, I just saw you as a lifetime friend.” Gail Bruce says twenty-seven years after we met.

I was mesmerized when I first saw Gail. She was awesome, like perfect, fifteen years older than me, tall and elegant . A successful painter then, but she’d also been a top model who worked with Dianna Vreeland ( one of her mentors) and an actress, after being discovered by Howard Hawks. But what touched me most was her kindness, her sweetness. She immediately made anyone feel loved and seen. I wanted to be  bigger just to fit the way she treated me.

My mother never perceived other women as a threat and she was the first to teach me that women could be role models. Maybe she should’ve been a bit more careful since one of her best friends took off with her husband, but my mother even saw this as a blessing in disguise. Growing up as a teenager during the Second World War she became strong  in the face of adversity.  Her husband, my father, died five years after they met and even then she  taught me  that change, however painful, eventually leads to growth.

In the late sixties my mother got into American feminism through writers like Erica Jong and Marilyn French and had an epiphany when she realized that she was part of something larger – the cultural changes that allowed women to see that they were not alone, that the expectations and traditional roles they played all lead to the same question: Who are we beyond mothers, wives, and caregivers? With this realization she impressed on me the importance of independence and  a career that I loved.

By seventeen I had my own apartment in Amsterdam. I studied art and made money as a fashion model. Next I moved to Paris, then Australia, and I ended up at the Royal College of Art in London. I talked to my mother every day and her endless praise  propelled me into becoming a successful fashion designer.

When I lived and modeled In Paris I looked for role models but only found fierce competition.  I was too naïve to realize that the beauty business operated on the principle of divide and conquer  to sell endless products into the female void of insecurity. How could I find a mentor if most women did not trust models? I had to find someone who was bigger than all that. Meanwhile I had crushes. There was Zandra Rhodes, the outrageous designer. I tried to be her acolyte but she just needed a body to fit her collections. There was Mick Lindberg, an ex-model who had crafted a life so exquisitely perfect that I both crumpled in her shadow and aspired to be like just like her and there was Jenny, the ex-wife of my boyfriend, who left behind a trail of such enormous accomplishment that I was jealous and inspired all at once.

Then I met Gail. Gail was from New York. She came to stay in our tiny cottage in Dorset. My boyfriend Michael had known Gail (and her husband Murray ) for  years. We had an intimate weekend of cooking, drinking, games and long walks and when she left Gail said to me:

I felt embarrassed. After all we were in England and in England nobody ever said I love you, not even my boyfriend.

Two years later  I stayed with Gail and Murray in New York. They had more friends than I thought  I’d ever have in my entire lifetime and their huge loft, the entire top floor of Westbeth, was its own universe.

My room overlooked the Hudson River on one side and the World Trade Center on the other. Every day another crew of photographers, models, editors and hairdressers used the white open spaces as a shoot-location. At night the cast changed into friends who stopped by for drinks and others who stayed for dinner. No one ever went to bed before three in the morning. Artists, writers, actors, directors, and singers from all over the world came and read their latest stories, showed their latest movies, played their latest songs, unveiled their latest canvasses. Gail introduced me as her amazing designer-friend from London.

My collection of  brightly colored washed silk clothes sat on a rack in the screening-room, Gail brought in her girl friends, I took orders,and she floated around ethereally, with a love and peace smile on her lovely face , while Dakota, her four year old daughter, toddled around, was passed from lap to lap, already with more friends and aunts and uncles than she could fit into her head.

That’s when I first learned that there didn’t need to be any  boundaries between work and home, careers and friends, eating and dinner-parties.

Everything was all just life.

I felt lucky to be included, lucky to know them and when I returned to London I tried to emulate their life. It wasn’t easy. The Brits were too reserved and private.  London now looked dull  to me. I wanted to be in New York with Gail, my soul sister

So when I moved to Manhattan in 1986 I stayed in the Loft while I looked for an apartment in the Village.

Gail had just become involved in a new venture, that was going shape the next twenty years of her life. Every night she met with her friend Anne Sward Hansen in the space under my mezzanine bedroom. I couldn’t help but be drawn in. Annie had recently visited the Rosebud Indian reservation in South Dakota and had learned that of all the American Indians who left to go to college very few returned to their native homes. This created a brain drain to the reservation which was in desperate need of its own doctors, lawyers, teachers, business men etc. Gail, who is part American Indian, and Annie decided to create The American Indian College Fund. The plan was to raise scholarship funds for American Indian students at tribal colleges and also help these colleges grow from trailers into more sophisticated learning environments. What started as a dream is now an organization with assets of more than 28 million and annual scholarships for over 5,000 Native American students.

Over the years Gail has introduced me to many teachers – artists, medicine men, psychics, writers – caretakers of the mind, body and soul. I became design director for CK at Calvin Klein and married an American Scot. I had my daughter Iona shortly after Gail had a grand daughter, Tyler. Now our two daughters are best friends. Gail became my family in this country; she gave me a home and a sense of destiny and threw me a huge  30th birthday party,  two baby showers and she’s (fairy) godmother to Iona.

Gail has been a mentor and role model for many young women, like Ann Edinger, a young student who became Gail’s assistant on the Cultural Learning Centers Initiative. Together they instigated the construction of cultural buildings at the reservation colleges – homes for the newly repatriated cultural items that had been away from the tribe for a long, long time. Ann is now a successful lawyer with a firm that represents not-for-profit organizations.

One of Gail’s own teachers was an Indian elder called “Grandfather”- a Chumash Indian Medicine Man who taught her that compassion is the most important human asset, the ability to put yourself in some else’s shoes and open your heart.

“The most important thing to learn is to be kind to everyone,” Gail says. “You can kill just about anyone with kindness.”