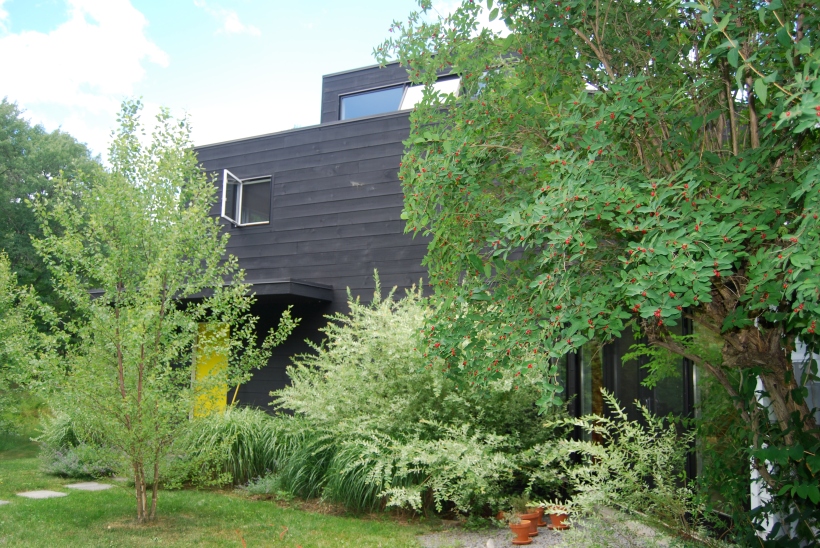 There is, I realize, no place like home, and our house in Milford feels a lot like home, even while I’m still into de-renterfying mode, like why is our wireless network suddenly called Casa Cielo? Why is there no longer a phone in my office and where the hell is the egg tray from the fridge? I ask myself are these my pots and pans underneath this black crust? was that really a mouse running out of the fridge? And wasn’t my shower curtain  white and not ombre´ brown…? Every day holds another renter trail surprise and all lead to the inevitable conclusion that renting and owning are two different states of mind and thats putting it nicely… 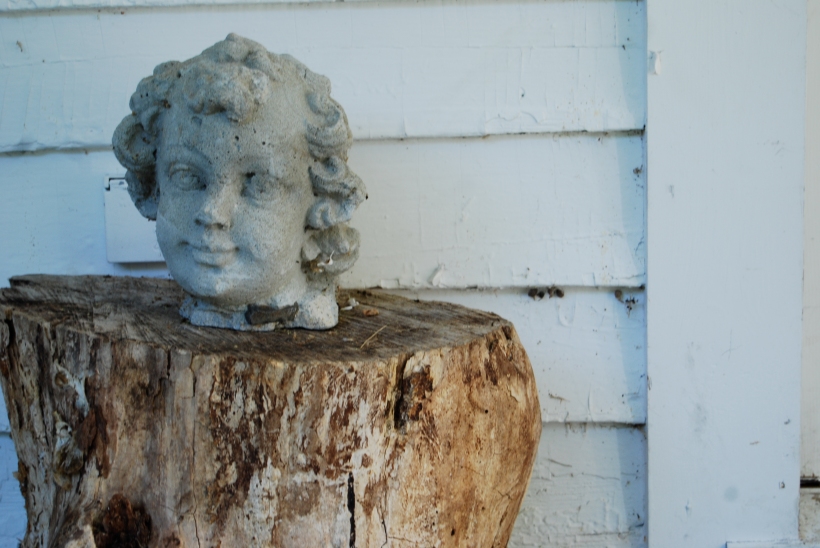 Still, I have a gorgeous home. My home is me. My home is us. Alastair, Iona, Iain, Kiki and Leila. I wish I could carry my house, like a turtle or a snail, to Miami Beach and to Eleuthera, and everywhere else I fancy living.

You have a question? About the town of Milford? What is it like? Actually, its pretty cute but culturally a bit disappointing. I’ve been here 22 years and given the chance the good ‘ole boys still call me a newcomer. An accent (the UK Queens English), a past in New York City (and beyond), and a wardrobe that may include a few designer labels, will earn anyone here that title. Newcomer. Like immigrant. Someone who  does not belong. (A strange phenomena on this New Conservative American landscape, like really, which generation earns the righteous right to say they belong? First? Second? Third?)

The big disappointment came in the guise of Dunkin Donuts. On main street. Right next to the lot that had been bought and earmarked for our airy, lightfilled and green new library, designed by Fred Schwartz , the super fabulous architect from New York, who won the competition for this new building. Unfortunately to us, Milford’s new generation, the entire venture was perceived to be organized by so-called Newcomers. The ones that had lives in New York. Those terrible uppity outsiders who think they are better than everyone else. Thus the new library  split the town in two. The good ole boys did not want this library and riled their troops as if a nuclear power plant was taking root right in the center of their town. While we were in Miami a referendum was held in Milford Borough, population 3500, which sealed the fate for the county (population 40,000). Result: No modern-architect-designed-green-library would disgrace their cute “historic” town. 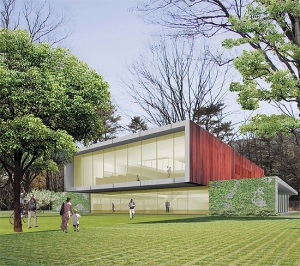 However. After citing that no chains like Dunkin Doughnuts, Home Depot or flat-roofed modern structures would find their way into the Borough center (“over our dead body “) the town officials somehow  thought that, instead of expanding the Milford mind,  Milford waistlines could benefit from some expansion. Dunkins opened and, insult to injury, it borders the proposed, and purchased, library site, overlooking the stream, the Knob and the Victorian walk along the Sawkill Creek, which no DD consumer will ever appreciate.

And while I’m at it, can anyone tell me what’s with that third new fireworks store, the first thing one sees when arriving – Welcome to Milford – Historic town?  For some obscure reason, this fireworks store is the only business in town, (who are they related to?) that doesn’t  have to adhere to the strict signage ordnance (cute, small and historic) and has its own patriotic (tell me what’s so patriotic about fireworks, their sound of gunfire?) huge banners and flags and other in-your face-paraphenalia that tells the newly arrived visitor, NOT, “welcome we are a cute historic town”, BUT, “howdy we are a loudmouth, keep small children indoors, gun touting, heavy-drinking, devil-may-care kind of place where Bikers are Welcome, liberals and librarians – Keep Out.”

So. I love my house. It is perfect. It fits me like a glove. But Milford, after showing years of improvement, the Fauchere, the Black Bear Film Festival, the annual Music Festival, the efforts of Dick Snyder, Sean Strub, Peter and Reggie, Hilary, Nancy and Darryl, Donna Hamilton, Alan Greenbaum, Jerry Beaver and Nancy Pitcher, and many others, seems to be slipping towards the appeal of the mass dumb-down culture, like the Dunkin Donuts and fireworks stores, Turkey Hill gas stations, smoke and lottery shops and tight Park Service regulations instead of organic farmer’s markets, funky independent boutiques and many good, cool bars, music/poetry cafes and restaurants.

But I know Milford won’t give up. We still have the Patisserie, the Waterwheel Cafe, the movement to renovate the old movie theatre, the Indigo Arts building with 7th Street Coffee, and all power to them. Yes to those who may have lived in New York, and who know the cultural trends and  call for originality, creativity and independence… 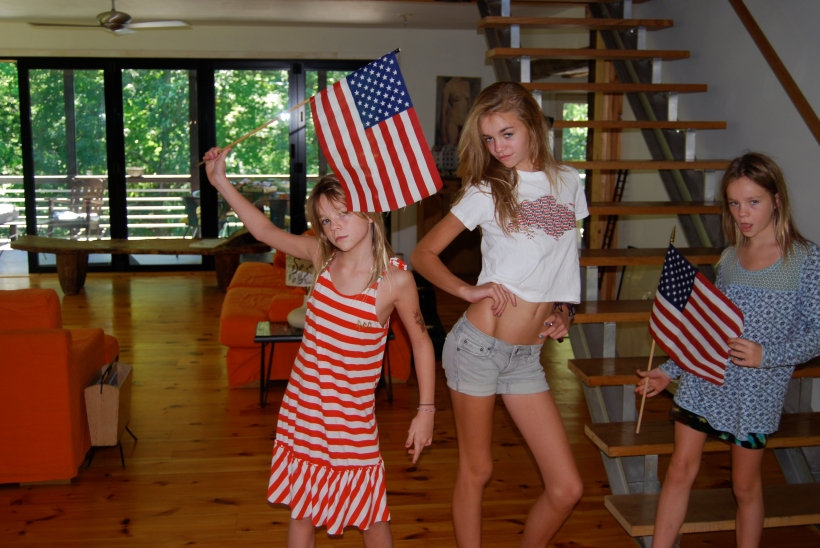 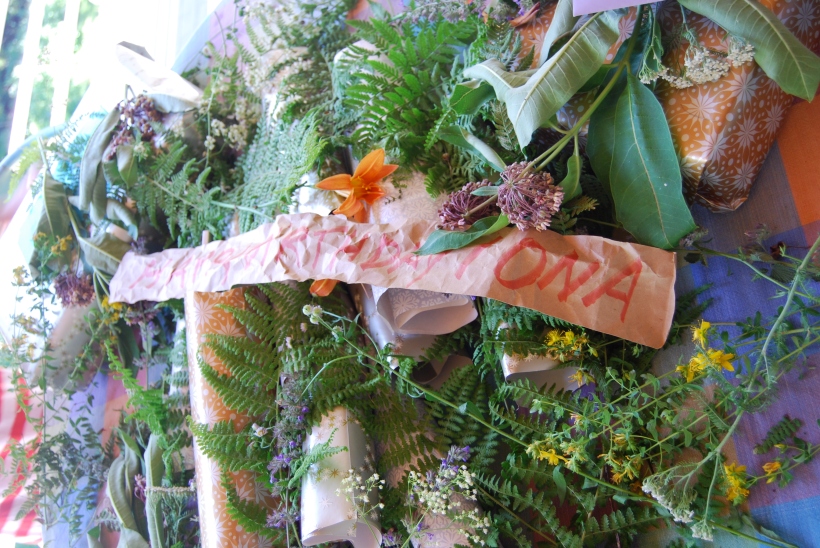 Speaking of which, Iona’s birthday, fourteen this time, was yesterday, July Fourth, and her adoring, adorable Dad, bought her a MACBook. She is in heaven while the rest of us are envious. Jealous of the speed with which she goes online, the perfectly white key board, the options and features that come with it.

Of course Iona had it all, call it fall-out from my omnipotent “singing telegram mother”. Birthdays have to  be the perfect balance between gifts and wrapping, appearance and content, guests, friends, family, cake, singing, food and love. I think I scored 80 out of a 100. A brief but loud spat with husband knocked 20 points out of Iona’s otherwise perfect birthday chart… but who knows, maybe, in the end, that’s the best gift of all – the lesson that perfection is a mere rainbow which stretches from one unreachable yard to another and that in reality God is found in the details, including the small imperfect details like fights and conflict, which complete the whole circle of our existence….

…the Mildred’s Lane saturday night events, our other home away from home sweet home.