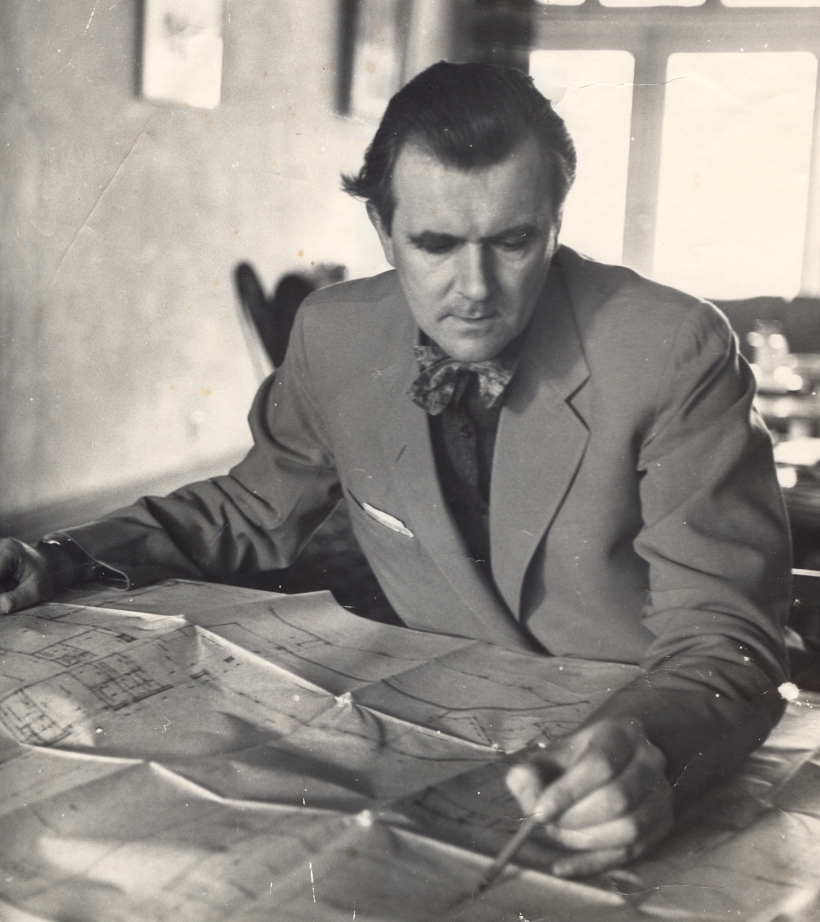 my dear father, an architect

I was not quite two when my father died

Seven years after he survived a German concentration camp he married my mother. Five years later they had me. My mother told me that my father loved me deeply and that, after the war-years in which he’d lost everything, which had been dear to him, he was  happy and hopeful again. Still it all ended, regardless, as his car hit a solitary tree, waiting for him like the last Nazi, by the side of the highway.

So, for the following fifteen years, I had relationship issues. I fell only for men who went away. I had quite a few long distance relationships, passionate when we were together and then heartbreaking when we were apart. It felt like love to me. I loved men who were emotionally unavailable, I loved a famous athlete who was always either competing around the world or in training, I loved one married man, I loved a junkie who loved his needle, I loved a Jew who told me he only could get serious with Jewish girls, I loved a man who always, always stood me up, and all this felt like love because I thought that if I could make these men come back to me then everything would finally be alright again.

When I turned thirty I moved to New York where I met a woman called Midge. Midge saw me. Like really understood all of me. Midge said, “I know just the person you need. A young medicine woman called Ashtiana, she helped me beat cancer….”

For three years I saw Ashtiana, once or twice a week. Ashtiana was psychic, she had trained with an American Indian medicine man, and healed purely from deep instinct, which never failed her. Ashtiana  helped me save myself.

I’d grown up in Amsterdam , which was hardly a mythical place, then moved to London which was hardly spiritual.   I’d never heard of  New Age  so  I went to see Ashtiana without any prejudice. Our first appointment was a traditional psychic “reading”. She didn’t use a crystal ball or palms or tea leaves or cards. We just sat together in her  Greenwich Village fourth floor walk-up  and surrounded by American Indian blankets, drums, flutes, pots, dream catchers and crystals in every color and size it felt like a visit with a new friend.

I did not need to tell her that I made dumb choices in men. The first thing she said to me was, “they always leave you, don’t they?”

So I asked her if I’d ever find true love.

She said, “Yes. Yes, he is very tall and he’s creative and he’s not American.” ( I rolled my eyes, another long distance one?) she said, “no, no he lives here, he’s here and once you meet him he’ll never leave. He’ll never ever leave you, even if you’d want him to, he’ll never leave and he’s not the kind of man who brings you flowers every day (I don’t care, I thought) but he’ll bring you unexpected gifts…”

Three years seemed an eternity, I wanted him tomorrow.” He’s not ready either,” she said. “he’s going through his own changes.” She made it sound like my future man and I were  getting prepped for each other by the universe.

So. I became celibate as if I was trying to erase my patterns, like rebooting or creating a blank slate, whatever, it was not something Ashtiana had told me to do, she only led me to what I needed when I needed it…

Then, when I was ready, open I guess, I went out for dinner with a tall, good looking artist. We connected. We had a great time. I asked him if he was American, but he was too drunk to answer.  I called him the next day and he could not remember me. I was shattered. How could he not remember, we were perfect together! As I sat in a traffic jam on my way to my weekend house in Pennsylvania, I said  out loud:

And then next to me, in the passenger seat, appeared my father.

Over the years I had come believe that when he died  I was too young to remember him.  I never realized  that he was a part of me regardless of my mind. That our spirits were bound together no matter how young I’d been. I cried the whole way home. I cried for me and for him, and for all those years that I thought that I’d been  too little to understand.

I had to re-unite with my father before I could love and be loved. Does this make sense, now, to you, as I write this 22 years later?

Of course I told Ashtiana that after my breakthrough I was ready, and could the universe please send my man along a little sooner.

But there were more lessons, more memories, more layers of perception and expectation that were laid bare, each one first painful then enlightening…

My Grandmother, Oma in Dutch, died five days before Labor day 1990.  Oma and I were very close.

Odd circumstances conspired so that I could not go to her funeral in Holland and at the time I was devastated. I did not want to be alone in Pennsylvania while the rest of my family mourned her. But then my friends Bern and Ilonka invited me to Easthampton for the weekend.

On Sunday we went to play baseball with their group of friends. And there , on first base, was a man who was tall and not quite American. I was in the outfield. I miraculously made a catch. Next I hit it out of the park and ran my first home run ever. He was waiting for me on home plate  and held up his hands. As we high-tenned the energy shifted. I knew it was him, tall, good looking, funny, smart and Scottish. I’m sure  my Oma’s spirit was there on that diamond behind the Catholic church, helping me along before she passed on to the hereafter…

Twenty years ago today we went on our first “date”, which I refused to call a date, because I’d had so many bad ones and this was my new beginning…

and twenty years later my  “date” wrote me this e-mail (ironically we are apart this week, he in Pennsylvania and me in Miami):

– Good morning on the 20th anniversary of our first “date”
of me getting up and waiting around
to call you, not wanting you to think I was over eager to see you and then
dialing the number you’d written on the orange Post-It
with a little flying heart above the number and saying
hey
shall we go to a restaurant in Montauk for lunch?
and you not wanting to go to a restaurant so
we decided on a beach picnic
and me
coming to that house on 3-mile harbor road
and you not being there and me thinking that I
was getting a high class blow-off, imagining the race car driver having zoomed in before
me with his faster car while I was driving the beat up old pick-up
like a loser,
fueling my insecurity about not being
urban enough for such a
lovely fashionable woman
and making small talk with Ilonka who seemed embarrassed
and sort of restless and thinking
I should probably
leave
and almost walking away when you finally
pulled up with Bern
and then
I remember
my first impression was how
beautiful and tall you were
and then
you rushed up to me and gave me a huge wet kiss
and apologized
and we kissed again
quite passionately
in the bedroom there
and you got ready
and then we drove off in my truck to
Springs and bought some beers and
sandwiches
a single chicken cutlet
and down to
Gerard Drive and found that little quiet spot around the bend
and lay there and chatted and put the beer in the
water and kissed a lot and swam and fell in love
even more.
And then the rest of the day and you
going back
not sure about me being around

and you driving back to city…