“You can make beautiful with garbage?”

Her eyes, barely reaching over the edge of my desk, flash white with excitement. She seems transfixed by the colored beach plastic, silver rings and wire, nylon rope, ribbon, tools, earrings, pins and bracelets that are spread in front of her.

“You make beautiful with garbage?”, she asks again, like she doesn’t quite believe me.

“Would you like to make a bracelet?” I ask.

She looks at me and nods. Barely. Still not convinced.

I point at the bench with my tees and jewelry and the wall behind it where a long stretch of orange rope, found two days ago on the local beach, is stapled against the studio wall. Hooked on it are earrings, bracelets, necklaces long and short, from simple white crosses to clusters of multicolored pieces of beach plastic. Twenty-three in all. 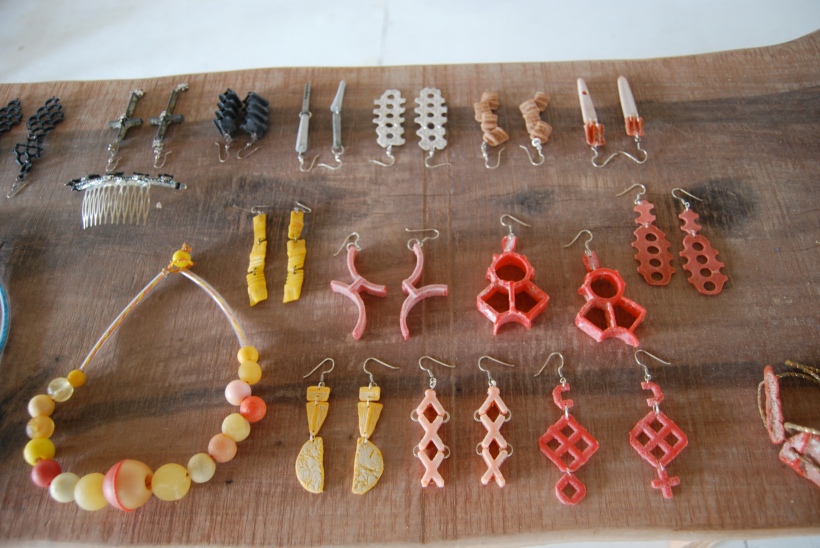 I get up and take her by the hand.

I think she whispers Latitia.

“See all these pieces, Latitia?”

“They were  made by girls just like you. How old are you?”

“OK, so yesterday two schools came here, to this studio, girls and boys, some were seven and a few were older, like  ten and one was eleven. And together we went to the beach and we all picked up the prettiest beach plastic, as much we could carry, and brought it back. Then I helped  them make the jewelry, all these things here.”

She tiptoes and cranes her neck to see each piece. I pick her up, and carry her slowly along the wall.

“These earrings were made by a boy for his mother,” I explain, ” and this bracelet was done by a girl just like you.”

She squirms out of my arms and runs back to the work bench.

“I want to make a bracelet, now!” she calls back at me.

We pick the stretchy string, she wants pink, and I pass her the box of  beach plastic with pre-drilled holes. I show her how to string them and I cut a heart from a piece of Barbie-pink beach plastic. When she is finished stringing I knot the ends, add the heart and slip it over her wrist. She holds her arm away and admires her work like she’s Holly Golightly at Tiffany’s, then she smiles up at me and says,

” I want to make earrings for my mother.”

I arrived in Abaco (North Eastern Bahamas) Thursday morning aboard (the most delicious shade of pale blue) twin-engine plane, courtesy of Schooner Bay, a new, green and self-sustainable village of which I will tell more later.

I had been flown in by Clint (of community development) who jokes that he met me on the internet. Clint, an avid beach plastic collector with a special attraction to the beach bobbles from girl’s elastic hair ties (“They find me, I don’t find them”) introduced me to  well-known Bahamian artist  Antonius Roberts (his gallery/workshop is in Nassau) who graciously invited me to use his Schooner Bay studio and teach local children where/how to collect beach plastic and turn it into art or jewelry. My wampum fee, with which Clint (a fly fisherman) lured me in, was a wealth of weathered beach plastic bobbles.

Antonius explained that his vision for the Schooner Bay studio is to build a far-reaching community through workshops by visiting artists and designers, and I’d be the debutant-artist-in-residence….

Saturday was the first ever Schooner Bay Spring Festival, with music, a bike rally, an arts and crafts market, a barbeque, open houses, and an exhibition of the work created the day before by the students from the All Age School at Sandy Point and the Cross Rocks School alongside my jewelry, tees and scarves (as the original inspiration pieces) and the powerful work, sculpture/furniture by Antonius that is made from trees, which he reclaims after they’ve been cut down to make way for land development.

I spent Thursday afternoon collecting Abaco beach plastic and setting up the studio for the kids.

At 9 am the next day about twenty boys and girls, two teachers  and a principal filed into the studio and crowded around Antonius and I as we explained the project before we all piled into three cars and drove along the sandy coastal road till we reached the part where  beach plastic collects in shameful mounds just over the dune. 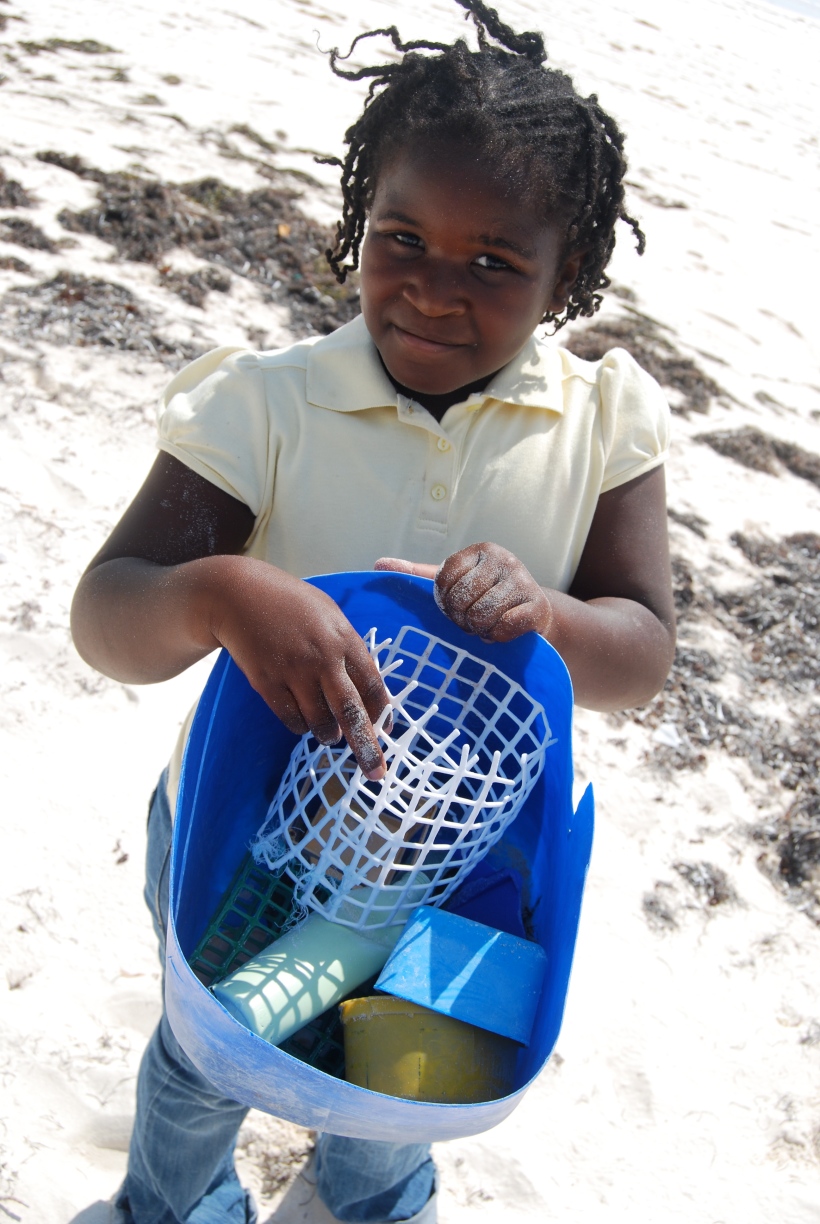 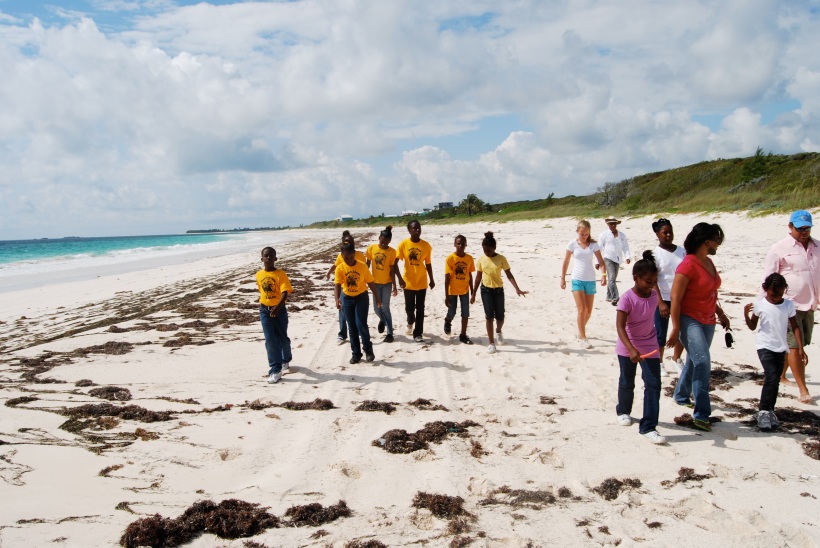 We talked about all the things that belong on the beach, like sand and shells and seaweed and dune grass, but not plastic.

I had no idea how I was going to coral the eager, lively mob into a focussed jewelry making class.

I was scared that I’d fail. That I wouldn’t be able to reach them and capture the ideas I wanted to pass on….

So I told them to sit on the floor and spread out their beach plastic. To find a favorite piece. Something that had color or shape, which was special.

I sat down on the floor.

Then I just started.

I started with the girl closest to me.

The next girl watched us and started cutting her own beach plastic. Then the following girl copied her. Three boys stood behind me. They watched and went to find pliers. At some point our creative resonance morphed and suddenly every kid was busy making a piece. They were calling back and forth for scissors, cutters, wire and string. Some stood around the table, others were splayed on the floor yet others sat on Antonius’ benches.

Wire strung with clusters of beach plastic were dangled impatiently in front of my face, almost poking my eye.

Some copied my pieces exactly, some did their own thing, but no one sat around waiting for someone to tell her/him what to do. 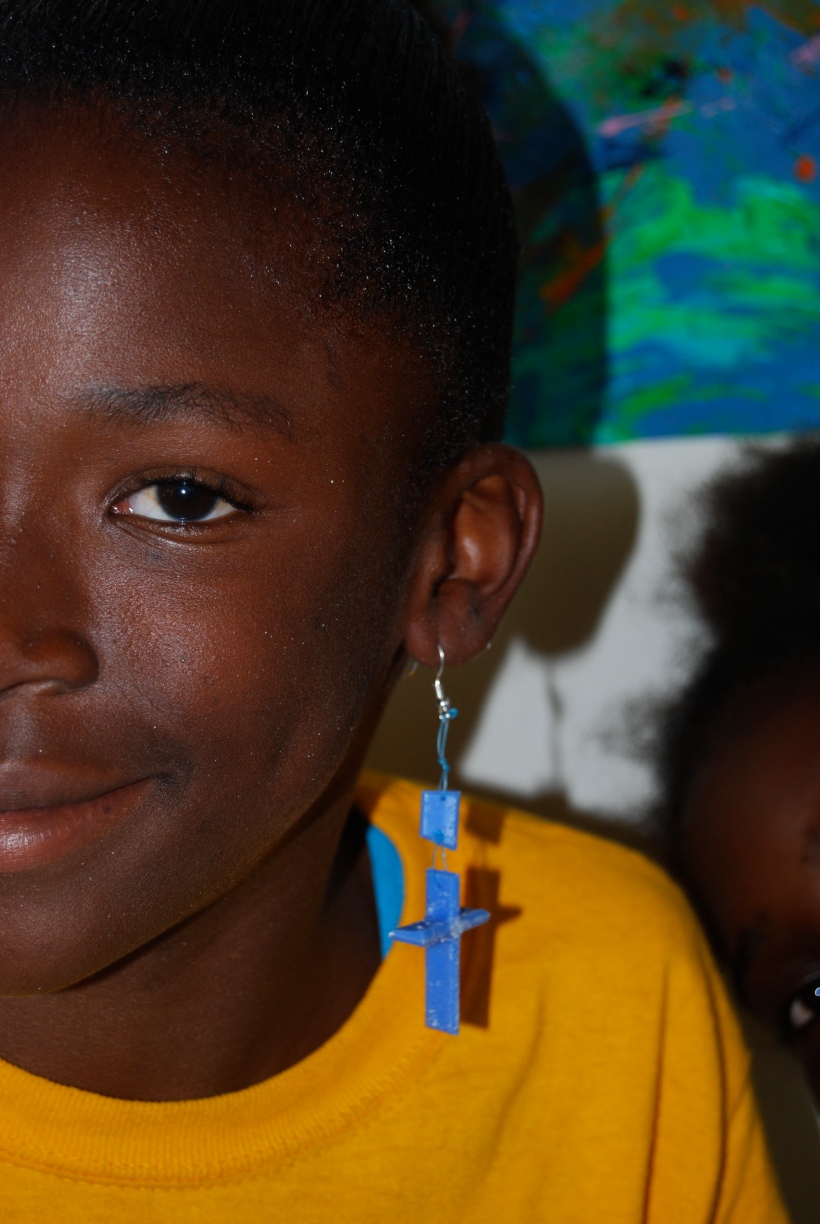 The principal sat off to the side, she’d already finished one set of white earrings for herself and would make three more and a choker. 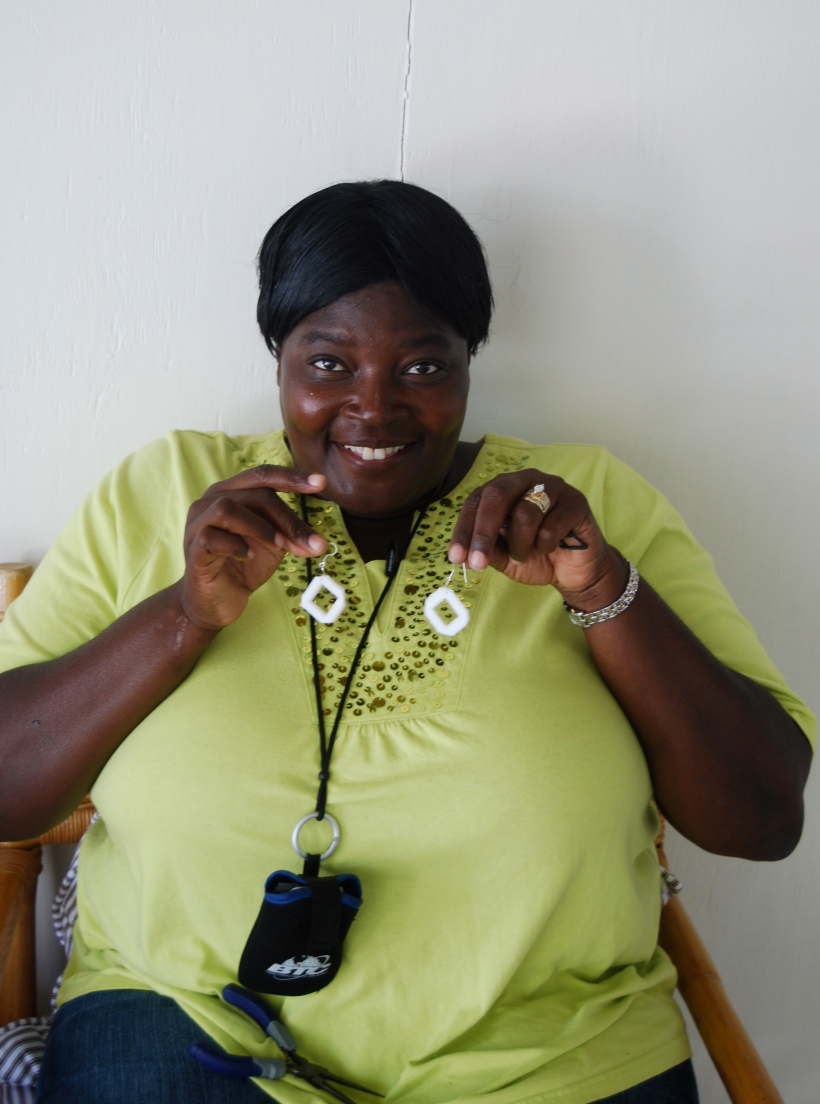 Coco, Clint’s assistant, was the allocated Dremel drill operator and kids lined up to have holes made in their beach plastic pieces.

Three o’clock came as a surprise, we’d all been swept into a timeless, creative vortex, and they all needed to finish “one more thing.”

“Please Miss. A pin, a bracelet, just this one earring.”

It took more effort to stop them and tidy up than anything else, but finally everyone stood in a neat row and one by one I made them hang their work on the orange rope. Reluctantly most of them gave up one piece for the art show the next day, but I’m sure quite a few pieces were tucked away to go straight home and be proudly shown-off.

Antonius  whispered in my ear, “I think you’re changing some lives here.”

But what I do know is that together we Made Beautiful – a common thread that connects our lives and, like the beach plastic, will be forever… 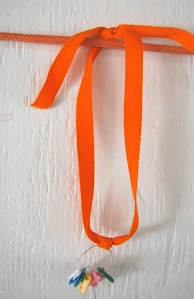 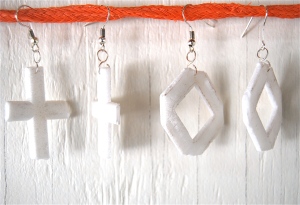 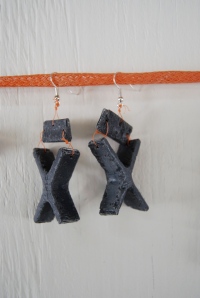 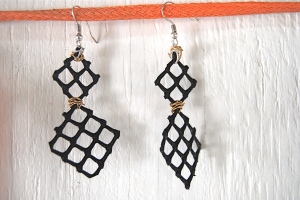 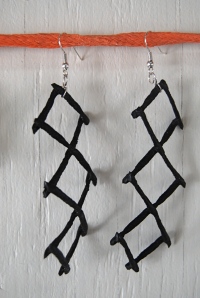