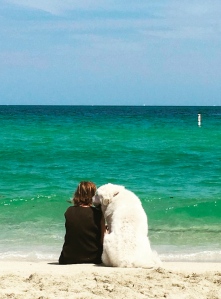 As Advised by Great White Dog

I find myself annoyed. Am I annoyed with Miami? After eight years of living here?

Much has happened in that time. We lived here during Obama’s his entire presidency. When we arrived there were many unspoken agreements that had shaped the local culture over the twenty preceding years, from the wild-west eighties until the crash of 2009. “As long as we are having fun” was one of them. Being serious was boring. I was called a Debbie Downer at a dinner party, when I talked about water in the streets as a result of climate change (that BTW, had made every guest late for the party). Don’t get me wrong, I like having fun, but my idea of fun is  different from dressing in skimpy but expensive designer clothes, drinking outrageous cocktails, clamoring around celebs and music so intense that the only possible interaction is taking selfies with your “friends” (while hoping for one with that star).

Yes guilty, my initial blogs were all about those parties. As an outlet for my culture shock. And, after years of working in NYC and living in Milford, PA with small children, these parties were so alien, so different and took me so far outside myself, that it felt like something I needed, in the way that getting really drunk sometimes feels like a healthy dose of vitamin C. It wore off fast, the so-called glamorous lifestyle, one that I had always walked away from, in Amsterdam, Paris, London and New York. It just isn’t me. I like to drive myself hard and if I don’t accomplish stuff I set out to do, I get depressed. I do not dream of retiring, shopping and sitting by the pool for the rest of my life. I need to be heard and seen and not for gossip and what I wear. So when the party dust settled I got to work on being relevant in Miami, no matter what it took.

It took a lot… I gave it my best… I feel depleted… I can’t say I conquered and I’m kind of over trying (… plus I’m getting shit done in other parts of the world).

And yes, I realize it’s not all about me and I’m not alone. Three months into 2017 and this worn-out feeling is a national depression. Up and down the East and West Coast we aspired to be part of a wave of hope that Obama brought with him. One that I saw as a way to change and save Miami, with talks of rising sea-levels, an ocean full of plastic, recycling and up-cycling, the right for all kids to an inspired public education such as DASH, affordable housing instead of 20% occupancy in condos and private homes worth billions on Miami Beach, air-conditioned year-around.

But if it felt like I was swimming against the stream over the past eight years,  I am now swimming into a Tsunami. Will the already lavish parties get even bigger and crazier as the 1% feels empowered, emboldened in their greed and need to flaunt it, with Miami Beach as the perfect stage for competitive one-percenting? Living less than a mile from Sunny Isles, with its six Trump Towers, and the highest concentration of Russian investments in recent years, Russia’s unabashed imperialism is palpable. And after the cuts to environmental protection, the NEA, healthcare, public transportation, education, housing and human and women’s rights, what will happen to the other group, the full-time residents and working class whose statistics show that Miami’s income disparity is one of the largest in the country?

Yet it is all about me. Also. About what I can give and do and how I will spend the next twenty years of my life optimizing who I am, what I have learned and how I can reflect this back on generations to come. In another year the twins will leave for college. I will be free from the school calendar, driving and feeding and other hands-on mothering. I look at them, and how they act and feel, and I remember being seventeen and practically jumping out of my own skin with impatience, anger even at being told what to do by teachers, parents, the system. The nervous restlessness that I now recognize for what it is in my girls – their booster engines filled with ambition for their future and need for autonomy, propelling them forward. As I see this in my daughters I recognize it in myself, four decades older than they are, but the impulse is the same, I am getting ready for another shift.

So I am annoyed at Miami. Or I am just annoyed. I am practically jumping out of my skin with irritation at the status quo, and like a very old teenager I’m going to use this urge to amp it up some and get more shit done…

(But maybe not in Miami). 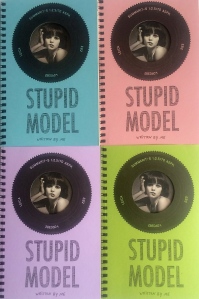 in a holiday inn suite with two surprisingly comfy queen size beds, twins fell asleep to their mantra of being homesick. we did washington yesterday afternoon, it was supposed to be a whirlwind visit but thanks to mapquest who got the geography of washington, nw, sw, se, ne, etc totally screwed up I’m pretty sure we saw ALL of das capitol. road signs to manassas and dumfries which Iona quickly turned to dumassas and manfries helped me stay alert. food on the road is a huge problem. bigger than universal healthcare. in fact if food on the road were only slightly better we may not need universal healthcare. i will send an open letter about this to obama, who we did not meet on our visit, which was a good thing since michelle was bound to spot the large grease stain on my new donna karan skirt (which she would admire) caused by the breakfast sandwich i purchased, and chucked out the window. savannah tonight with the possibility of a green salad.