The windmill at the Island School

“My career is really taking off here” was not something I expected to say seven years after I first walked the beaches off Eleuthera . When I first noticed the colored plastic bits in the  surf line and was strangely attracted to their paradoxical existence, the color they added to the natural elements, the way many plastic shapes seemed to find organic companions and together created still-lives in the sand. Like the green flip flop perfectly aligned with matching green beach grass, a white bottle top buried in black seaweed paired with a round shell of the same color and texture, two golden seeds cozied up against the edge of nylon string as if they had agreed to meet there.

Seven years later I notice it still and still crawl the beaches hungry for more, for pieces I have neither found nor captured before.

I sat with my friend Maureen on her most perfect porch overlooking the long curve of Wyckee Beach.  The sand and sea tinted vibrant pink by the early sunset.

Career and Eleuthera in one sentence, how’s that possible? I asked.

I had just returned from the Island School down in south Eleuthera, beyond Green Castle near the settlement of Deep Creek. The school takes juniors and gives them a mind, body, and spirit journey that takes them away from their traditional high school curriculum wherever they live.

Nadine, the art teacher, had invited me to teach a beach plastic workshop to 48 kids  in the Fall semester.

But on the first day I taught a workshop at the Deep Creek Middle School which is affiliated with the Island School.

We started the day with a beach sweep at the Cotton Bay Club (Juan Tripp’s Eleuthera dream  of more than half a century ago.)  Its ruins hide just beyond the dune amongst the Casuarinas, gaping and crumbling fifties bungelows some with indestructible nylon drapes ghostly in the wind. Here we collected beach plastic that had been swept into the dune grass and beyond by hurricane Irene last August. Stories of the eye passing over the island twice still fresh on everybody’s lips.

It was a good time for harvesting beach plastic…

That evening Nadine showed the One Beach film to faculty and staff of the school, projected on a white wall in her apartment. The film, which is 24 minutes long, took about an hour. Five minutes of  loading, five minutes of watching, everyone was used to slow connection, laid back, on island time.

I answered questions while waiting for buffering.

The next morning we had our first Island School workshop.

I love the intensity in the class room, everyone scavenging the piles and looking for ways to make beautiful from beach plastic, tentative at first, picking up a piece, feeling it, studying its color and shape, teaming it with another, then picking up the tools and shaping it, insisting that NO it’s not trash, it’s not orphaned, it is material.

Insisting that “Away” is right there, in their hands… claiming ownership.

(We did stop for 11.11.11.11, standing in a large circle counting down while one girls kept trying to peek out of the window to see if the end of the world was reaching the Bahamas.)

By the end of this workshop Nadine and I felt we were out of good beach plastic which was a perfect excuse to take my first trip to the famous Lighthouse Beach, where beyond the dune amongst  Casuarina pine needles we found enough for many more earrings, bracelets, neck and other art pieces. 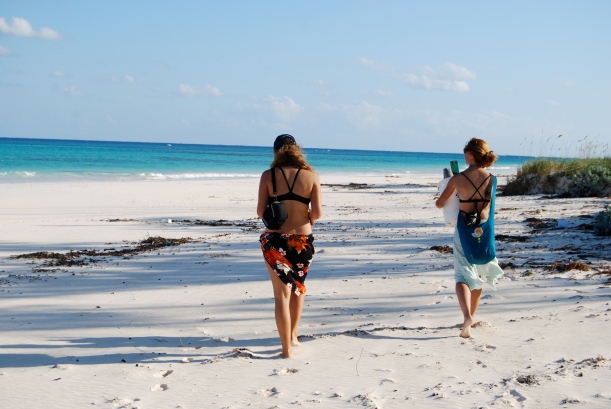 The next morning was workshop #2, a second group of 24 students.

Afterwards a 16 year old girl wrote about her solo overnight camping experience and beach plastic on the school’s blog:

(It made me weep for it captures past, present, future and the possibility of change…)

Sitting in my solo spot on one of the most beautiful beaches in existence it seemed that the world was perfect. That was until I turned around and saw the pile of trash behind me that had washed up on the beach from Hurricane Irene. In my time in this spot, I had picked up a tiny fraction of the trash and put it into a pile. But, what good was it in a pile? It was organized, and parts of my spot looked neater, but I had done nothing more than transfer the trash to another spot. For the next forty-eight hours I continued to try to pile the trash. I found funny little things including many bottles and a strange little dog toy in the shape of a bear. As I walked away on day three I looked back. Now my spot looked clean of trash, only I knew that behind the bushes was a large pile of garbage I had hidden, but it was there.

I have been thinking of this a lot lately, this whole idea of where our waste goes. The reality of it is that when we throw away our garbage and it disappears into a truck it still sticks around, forever. Our guest artist today Barbara de Vries talked about how when you buy a drink in a bottle we have this idea of just owning the liquid, but we need to own the plastic bottle as well and realize that it will never really go away. When I walked into Barbara’s workshop Saturday, I was astounded. Lining the walls were beautiful pieces of art, it wasn’t until Barbara began to explain her materials that I realized the earrings, necklaces, bracelets, shirts, rings and decorations were all made up completely of trash. Then Barbara explained that we would be working with the same plastics today to create art. She said that she had found all of the materials for today’s workshop from Lighthouse Beach, the same area where we had our solos. My mind flashed back to my pile of trash in my spot, and I had this strange feeling of relief. Finally, the junk would be put to use and be safe from washing back into the ocean. I went out to look at our options, and staring back at me was a blue and white dog toy, resembling a bear. She had discovered my pile of trash, and saved it. I watched, amazed as the trash was transformed into art. At the end of the day one of my friends had created a pair of earrings made from the handles of the dog toy. I realize now, this trash may never go away. But we can save it. We can transform it into something beautiful, and continue to educate about keeping our beaches clean. This experience forever changed the way I look at plastic and ‘garbage’. Instead of feeling guilty about the trash at my solo spot, I am wearing a little silver ring, with a piece of blue plastic set into it, that came from a funny little dog toy.

Did she know that the face of the little dog toy is in my toolbox? I had nabbed it off her table to incorporate as the clasp of a yellow necklace.

But now I am keeping it with me, just as it is, to remind me of Cacique Claire, Nadine and everyone else at the ground breaking, paradigm changing, most awesome Island School.