It was the welcome party for a weekend of Earthday Festivities in Eleuthera and I was the featured guest with a gallery full of Plastic is Forever – earrings, bracelets, necklaces, scarves, tees, kerchiefs, stationary, and even a pair of pants and a “red carpet” dress. 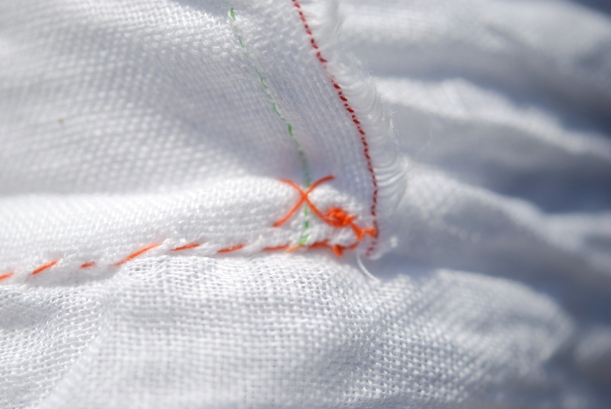 I took over the Beach House Boutique which belongs to my friend Jude (she had generously donated the space for the day.)  Usually the shop is a cornucopia of treasures, a feast for the eyes, a trove of endless fashion goodies- something for everyone, but I had planned to strip it down to a white, bare, breezy gallery space. A place where the colors of a new generation of beach plastic would speak loudly to an audience that came from all over to celebrate Earthday in Eleuthera.

For starters I needed five sheets of plywood, painted white, to cover the walls, and had located them as soon as I’d arrived in Tarpum Bay. They were stored at the fire station, they were already white, and they were mine for the event, but eventually would end up as the ceiling of a community building. Perfect, no waste, they would be recycled….

On Thursday, the day before my  installation, I drove past the Governor’s Harbour park where Saturday’s festivities would take place. Stalls for local vendors (food, crafts, drinks and community info) were already built around the perimeter and in the middle stood a small hand-hewn stage prepared for the eight consecutive hours of island music  and  speakers.

The white backdrop of the stage looked vaguely familiar. It was made from five sheets of roughly painted white plywood.

Of course I panicked.

But no one else did.

I melted down NYC style. Where TF was my plywood?

The next morning between 9am and 12 am ten sheets of plywood materialized. And a jar of white paint. And two brushes. Word had gone out that the lady of the plastic needed plywood…

poster in the Sands liquor store

I was disappointed that the dates of my daughters’ FCA tests in Miami made it impossible  for my family to get to Eleuthera in time for my event.

Julie Gilhart, Christine Park and Berrin Noorata had planned to spend Earthday in Eleuthera. To help me! After two weeks of lonely nights in my castle I had a house full of women – four sleepovers – I couldn’t believe my luck and they couldn’t believe where they had landed – paradise – a mere five hour trip from Seventh Avenue (same as a trip in the Hampton Jitney to Montauk on a Friday afternoon in July).

We spent Friday hooshing. I laid out the store after the plywood had gone up. Gallery in the front, One Beach  screening room and check-out in the back …

Julie, Christine and Berrin have worked together for years and easily fell into creating the pop up store.

Together we played shop and it was fun… 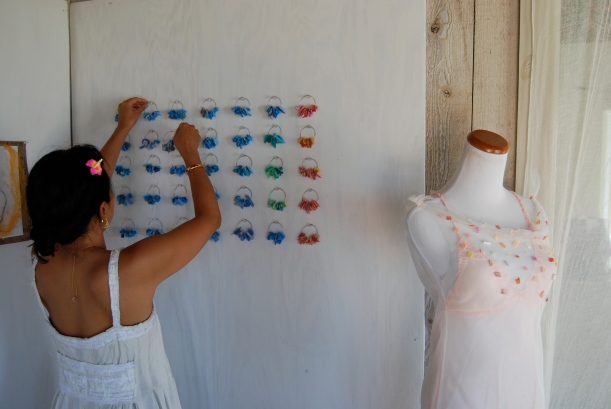 Berrin styles packaging and check out

At 3pm a giant inflatable plastic purple foot floated across the deck outside the shop’s window. Barefoot Wine, the sponsor of the One Beach film and the wine sponsor for the event, had arrived for set-up. Erected, right outside my temple against beach plastic pollution, was an inflatable purple plastic palace constructed from enormous Barefoot logo feet.

Those purple bare feet were not walking the One Beach talk. The message about plastic pollution, as in the single-use senseles plastic gifts of purple plastic leis and purple plastic barefoot key rings which were handed-out to our guests, evidently had not trickled-down from Napa Valley to Nassau.

The welcome party was a hit. Over 200 people attended and we sold a lot of Plastic is Forever pieces. 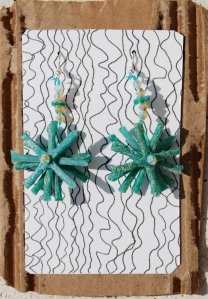 Eleanor Phillips from the Bahama chapter of  The Nature Conservancy welcomed the crowd, Shaun Ingraham and Michele Johnson introduced  the One Eleuthera Foundation. 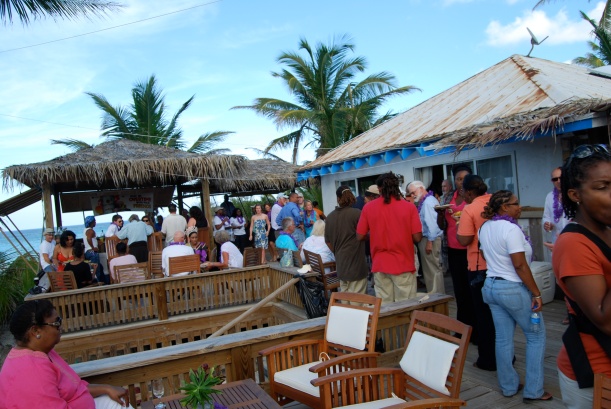 I spoke about how Away is Here. 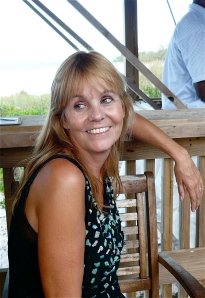 Wich means that whether we “get Away from it all” or “throw our plastic trash Away”,  Away is the same place – the beautiful beaches of Eleuthera – and how we, visitors, come from societies that litter the oceans. I urged the crowd to take responsibility, on behalf of Eleuthera, the place we all claim to love so much, and  help reduce the amount of plastic that ends up in the oceans and on the pristine beaches of Away – Eleuthera, Hawaii, Bali, etc.

The next day Michelle and Craig Symonette hosted the VIP lunch at their stunning home on Twin Coves. VIP indeed, $600,000 was pledged to One Eleuthera and they were off to a flying start. Shaun was beaming when I handed him my, by comparison, measly check, the % contribution to One Eleuthera from the sales of the previous night. I pledged more to come as a % of Plastic is Forever will continue to benefit One Eleuthera.

table settings with the first ever beach plastic napkin rings

Saturday night was party time in Bayfront Park  with reggae, rap and even a Junkanoo…

Sunday morning was very wet as a storm passed over the island overnight but Shelby White who created  the Leon Levy Native Plant Preserve, in memory of her husband, said it was the best gift mother earth could have bestowed on Earthday – rain was what they needed most.

The afternoon picnic at Coco di Mama hosted by the Urgo family was a windy affair.

Most people stayed indoors and drank. 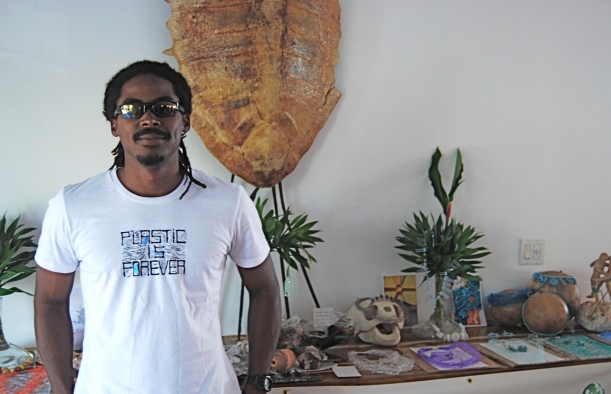 Coco di Mama is by far the cutest hotel on Eleuthera on the usually calm and turquoise Alabaster Bay . It has been my favorite ever since it opened. With the Urgo family as its current owners it is poised to expand to 42 rooms by January 2014, which is great news for the island.

By the end of the day, thanks to three powerful weeks and Sammy’s cocktails, I was giddy and somewhat worse for wear.

And sad that I had to tear myself away from Away….